Like any other day I sat on the couch sliding through my facebook wall and watching a movie in TV simultaneously (we excel in multi-tasking just like the new age mobile processors). While I sit there with my eyes fixed in the phone and my ears dedicated to the movie, my ears come across couple of interesting ads on the TV. So am going to talk about it and share my thought.

India is renowned for accommodating high number of telecom service providers. You see, it’s kinda funny, since the telecom market in India is highly competitive and involves a considerable degree of government intervention these service providers cannot start price wars and hence the only way to woo customers is through their appalling ads.

The first ad goes like this- This ad is to promote the telecom service providers called ‘IDEA’. They brought out this amazing *sarcastic cough* concept called IIN which basically stands for Idea Internet Network. They claim that the youngsters in the country can stop going to educational institutions and pursue their academic dreams through their IIN. So in the ad we are shown two youngsters sitting on a hillside.Let us name them A and B for our – mmh- my convenience. A seems to be holding a brochure of some hotel management school. B then says that his father isn’t financially strong enough to send him to a hotel management school. Now A throws the brochure high up in the air and kind of screams with utmost confidence “We don’t have to go to school to study!”  B curiously asks “What? Then how?” and then the other one takes out his smart phone and says “We will study through IIN!” I sit there staring at all this mockery. Man, when I wanted to join college, I went through an enormous number of colleges in India and made research like report and showed it to my parents and they did their own researching and we all together finalized a college. It almost took me a whole month. As far as I know Indian parents are the only mammals on earth so deeply interested in their offspring’s life. In such an environment how on earth would two INDIAN boys set out to study from a mobile network that too an Indian mobile network. You know what is funny about Indian mobile networks, they are like BATMAN, can never predict its arrival, except Batman had a working bat‘SIGNAL’. As the ad moves along, we find that the two boys have started figuring out the As and Bs of cooking from internet using the IIN and they rent out the terrace of an old building and start all their practical tests there. And one fine day they decide that they are good enough to start their own restaurant (on the same terrace). Now the old terrace looks like a million dollar villa’s terrace and I have no idea how they did that (maybe they learned that too from IIN). And the funniest part-uh nah- this is the second funniest part- we see foreign customers! Have you got any idea how long it takes to get a foreign customer especially for restaurants in India. I have been to places where they hang pictures of foreigners who have come there. Indians have deep respect and awe for foreigners, then why did we ask them to leave India in the first place O.o? The foreign woman asks for some dish which obviously our IIN chef did not know how to prepare. He Googles it out!! He finds it and cooks it- the point to be noted is that he didn’t know the dish at all in the beginning and hence he hasn’t made it even for once and then he makes it right in the first try. Well I am not making any comparisons and all but I took a week to learn how to make a proper burger! Forget that part let us move on. Now ladies and gentlemen presenting to you the most funniest part of the ad- the two boys they get to be in the cover page of a magazine following which they get the ‘’BEST HOTEL AWARD’. I didn’t know it was this easy to get an award in hospitality. I bet the owners of various restaurants and hotels would have lost their cool after seeing this ad. The sad part is that the service providers believe that they can actually woo the customers by such awful ads.

Now the second one – this one is less ridiculous as compared to the first one. This ad belongs to AIRTEL. The ad starts with portraying a young guy who seems to be a travelling places on his motorcycle. Well travellers usually travel to places they have never been to but our guy is here at his home town. Well can’t completely criticize that, preferences of travellers varies. Moving on, the guy sees an old man selling ice creams in his old cart.  He (young guy) suddenly takes his smart phone and starts recording the video of the old man. Soon there is a group chat among his friends (supposedly school friends). Now let us meet the friends. When the guy calls them, a lady is shooting (she is behind the camera) something in a forest like area, there is another guy who is in navy uniform, and a corporate guy in shirt and tie. They all are surprised to see the old man. They all come down to their old school where our first guy says he met the old ice cream man. They wait for the old fellow to come, and as he comes they call out “Uncle!” and the old guy turns to look at them, he stares at them. The ageing has mildly affected his memory. Then each shout out the money they owe to him. He smiles at them and says “No more loans for you all”. They shout out “We are not here for loans, we are here to repay it!” Then a huge red bus is seen with UNCLE’S ICE CREAM written on its sides in huge white letters and an image of the old guy. Well very touchy isn’t it. Basically the story is that the gang used to hang out having ice creams from this old guy (who wasn’t old then-duh!) and they owed him some amount each, and they are here to return all that along with some generous interest. All the viewers after seeing this would have wished to have given them loans when they were kids!! This has got a very cute and touching storyline but the reality is if we had such people around this world would have been a really great place to live in. What I think would have been more acceptable is that maybe they all going down to that place and meeting him and paying him something extra rather than buying him a whole new huge truck. How is he going to maintain it now? Am not being too much of a critic but we live in a world where kids don’t have time to spend with their parents, that’s a fact and we got to face it. In such a world people, that too people with high profile jobs keep all their work aside to meet this old man. But I have to admit this one is much better than the former one discussed. 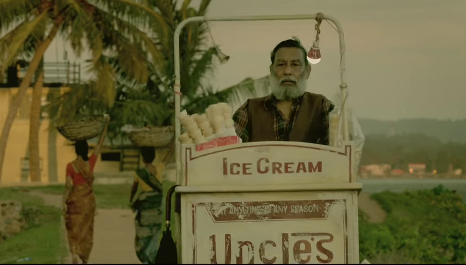 After seeing this ads I still am sitting on the couch staring at my phone, but I am not staring at any posts or any wall, just at my phone and am thinking “They show me this piece of thing can make so many differences, but I have seen no one using it that way. All I see outside day in and day out is people walking around looking into these, people driving around looking into these, people talking to each other looking into these. Well what do I trust now.” And I myself figure out the answer for it, I picked this up from my brother “A technology’s use cannot be generalized, it depends on the user! A wise one makes wise use of it while a foolish one uses it for foolish purposes!”

Well now that’s done with, I continue to scroll down facebook posts and watch– uh sorry- hear the movie.

2 thoughts on “The Smartphone Dream.”